Although this book has been out some time, it has only recently got to the top of my reading list, so a good time to share it again.

For a first novel, this is a remarkable book, taking us on the journey with Robert Kett from a seemingly minor outbreak of high-spirited vandalism in Wymondham and Hethersett, to an uprising of thousands which changed the course of government and a monarchy.

Tim Holden uses the historical fiction format to present a theory of how local small landowners and merchants Robert and William Kett ended up leading this massive uprising.  But in addition to laying out the historical events, Tim weaves in the stories of fictional characters and how their lives were changed by the events of 1549. 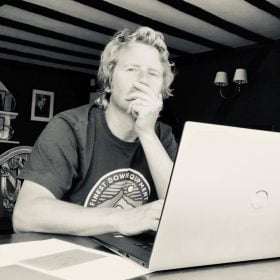 The background is well known – how enclosure of common land by the lords of the manors, in Norfolk and other parts of the country, led to poverty and dissatisfaction amongst the working people of the time.  It is set also against the backdrop of the reformation and dissolution of the monasteries during the earlier reign of Henry VIII and the loyalty of many people to the Roman Catholic faith and Princess Mary.  But the long standing question has been why did Robert Kett, a moderately wealthy landowner and merchant himself, come to lead a rebellion which wasn’t particularly in his own interest?

Tim attempts to answer this and follows the Kett brothers as they become more deeply involved with the uprising, initially just leading a group to Norwich to protest about the enclosures, but finding the numbers of protestors growing until thousands were camped on Mousehold Heath.  He explores the problems of managing such a large group with disparate views on whether it was better to fight or negotiate.  We also see what is going on in London, with the interaction between Seymour, the Lord Protector, and Dudley, the Earl of Warwick.

Of course we know it didn’t end well for Kett, but this story shows how he started the changes that would develop over following years to improve the lot of agricultural workers in Norfolk.  At the same time it’s a good read, with a well constructed plot and character development.